I love the Greek Islands, and my first visit to Pefkos, Rhodes was with my Husband in the late summer of 2010.  Although it was an amazing holiday it was slightly tainted with personal issues.  I was at my lowest weight during this episode of Anorexia, at one point Kev wanted to cancel as the possibility of me being ill whilst away was so high.  I did manage to persuade him that this was what we needed and ultimately it was a break that we needed together.  The stress I felt whilst away was at times overwhelming.  The huge choices in restaurants, waiters pouring olive oil on your barely there salad and the dreaded lack of clothing in the heat!!  But I did it and I loved it.
So again this year, whilst recovering from a hip operation I made the decision to go back to Pefkos and enjoy it as much as I could with the assistance of a crutch!! 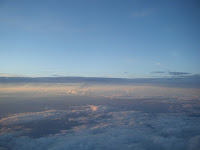 Un be known to myself our very good friends Deb and Glyn had also thought of Pefkos and we ended up sharing transport to the airport, was on the same flight, same resort and shared many cocktail laden late nights/early mornings.

So on the evening of June 6th we set off for Bristol airport after struggling to pack exactly what I wanted into just 15kilos luggage allowance.  Can you believe I could only take 3 pairs of shoes!!!
Our flight was at 9pm so we settled into the bar area until boarding.  Two pints of Guinness and several Valium later I was settled on the plane, dribbling on Hubby and well on my way to hollibobs. 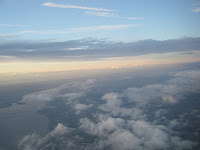 View from the Plane, I actually sat next to the window.

After a 4 hour flight, some pretty dire aircraft food and a lovely purchase of duty free Angel perfume (had to be done)  we landed at Rhodes airport at 3.05am feeling like a hot hairdryer was being blasted on us.
I then had a well earned rest sat down in the airport and left Hubby to play catch the suitcase on the airport conveyor belt. With loading, transfers etc we arrived at our apartment around 5.30am, unpacked and hit the bed and was out like a shot.  Now I wont bore you with the whole week, and I don't have many photos as the holiday revolved around food and drink.  Despite being pretty mobile now the uneven terrain and hot weather made travelling any huge distance for myself quite difficult.  I was happy walking from room to sunbed, to bar, to restaurant to bed. Instead I will give you a short summary of the highlights, lowlights and very weird dreams............

Its Sunday 10th June and were sat at a lovely beach bar overlooking the sea, drinking cold Mythos lager and eating Greek salad.  The bar is full of people taking in the view, staff busying themselves with orders and then it happens!!  The ground starts to shake.
Now I have felt the earth move before, on my wedding night in kefalonia 2008 (No joke!) but this felt a lot different.  As i felt my chair shake and looked across at Kev, a Greek waitress ran out of the bar and you could feel and hear the tension as customers just looked around at each other not quite knowing what to do. As quick as it started it was over......
As I regained my composure and stopped swearing I looked across the Island to see smoke bellowing up into the air.  This was also attracting the attention of the waiting staff who were pointing and speculating.
Thankfully this was a small forest fire common in Greece and not the result of the earthquake.

Earthquake overview :  A very strong dangerous earthquake occurred on June 10 at 15:44 local time along the Turkey and Greece Coast and scared hundred thousands of people in tourist destinations like Dalaman, Oludeniz and Fethiye. the earthquake was also well felt in many of the Greek Islands.


Flyers was another small and friendly cafe bar with the added interest of a small microlite plane.  The owner had his own landing strip next to the bar and did low cost trips around the Island.  Luckily I didn't know this at the time as i would have jumped at the chance...Not!!!!
On our first visit to Flyers I was feeling a little under the weather.  A combination of late nights, too much sun, not enough water, too much alcohol and a stomach bug had taken its tole.  I attempted to eat what I had ordered but embarrassingly left all of it.  the wonderful owner Nicos thankfully was not offended, offered to make me something else and gave me melon to 'aid my recovery.'  A few days later he remembered me and asked If i was better.  This time I ate my lunch! 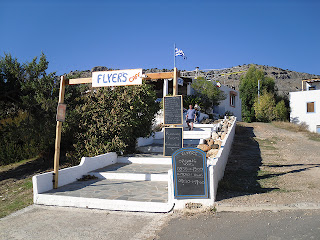 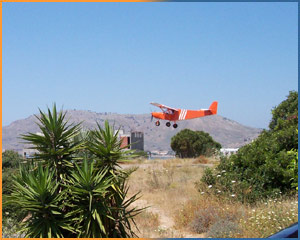 I have a great liking for Greek food with the combination of flavours, colours and textures.  Eating out in Greece is so different to British culture. The Greeks adopt the 'siga siga' slowly slowly approach where as us Brits give you a two hour slot, pile you in and chuck you out!!!
There were plenty of places to eat within Pefkos but we had our old favourites we always went back to.
One of the biggest problems with Greek food is there is no standard portion size so we often over ordered, and most main meals came with both chips and rice!! We soon learned to ask for one or the other.

This is a beautiful restaurant that we favoured many times on our first visit to Pefkos and is in fact the same place where I had my salad drowned in oil. e went to Spitaki on the first night of our holiday very late, after 11pm due to meeting up with Deb and Glyn and having a few too many pre dinner cocktails.  The staff welcomed us and despite already closing the grill allowed us to choose from the menu.  I got to try the courgette fritters again and actually enjoy them :)
http://spitakirestaurant.com/

This so far has to be the best place I have eaten (my cooking included) so far.  It is situated on the beach front above the Lee Beach bar and at night has the most amazing views out to the sea. Unfortunately I misjudged the time I made the reservation and we missed the sunset, but the company, food and drink was compensation enough. 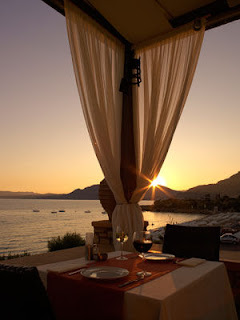 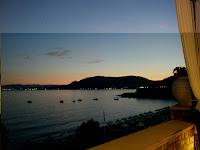 Throughout the holiday I had a bit of a dodgy tummy!! In fact I think I spent the majority of my holiday in the toilet. I was constantly being told to drink more water by Kev, Deb and Glyn and Jack at Fuse bar.
One evening we took a walk a little further into town before dinner to a garden bar called eclipse.  We sat down, ordered a beer and took in the atmosphere.  The waitress then came over, gave me a bottle of water and said, 'I have been told you need to drink this!!!'  I was baffled, thinking that jack was somewhere in the bar.  How blind was I!!  I hadn't even noticed Glyn sat across from us who was now giggling and trying to hide behind a plant!!

I have the weirdest of dreams at the best of times but none as weird as these two.
I go to the bathroom (again) to find the floor flooded, and the toilet cistern is hanging off the wall.  When I go outside to inform reception what I see before me is just a dark abyss, a hole with all the apartments fallen into it from the earthquake!!!

Another evening I dream I'm again on the toilet and I s@@t out an octopus!!!!!! Horrified i obviously feel the need to show Hubby who takes me to the Dr. A blood test reveals I have a parasite living inside me which has caused my stomach bug and has come out in the form of an Octopus. Weird!!!
Regardless of the tummy upset, strange dreams and mobility issues I had a brilliant holiday.  How wonderful to eat what I want and when I want. How amazing to lay in a bikini and not care.  Here's to August when I get to do it all again in Spain.  Yammas...... 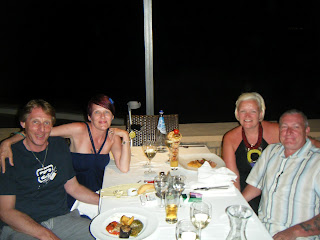 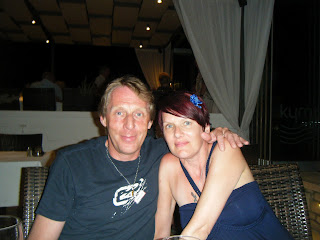