I Am,
Just me, no less, no more
I'm jolly and happy, sometimes a bore.
I know I'm not perfect but that's OK,
Perfect is overrated anyway.

It feels like forever since I have contributed to the 'Blogging for well being challenge,' I haven't forgotten about you all, life has just been a little hectic at the moment. I will make time to read others contributions, honest.
I think I'm a few weeks late with this one but what a brilliant prompt. 'Inspiration.' 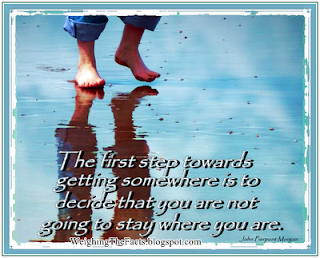 When I first read this the word that came into my head was 'Thinspiration.'  This took me straight back to over  two years ago where I would spend many hours into early in the morning trawling the Internet.
In a dark depression, slightly numbed by alcohol I would look at photos airbrushed or not of emaciated,  celebrities, comparing hip bones, collar bones and searching for my 'perfection, my inspiration.
I will not dwell on this as it serves no positive purpose, but during my searches I came across several websites which promoted eating disorder recovery.  From here I found my real inspiration.  People just like me, who understood, didn't judge and were supportive. They held out a virtual hand of friendship, were there in the early hours when no one else could be. They gave me hope with their strength, passion and love.  They helped me see a future, a life and make sense of what was going on in my head. They said it how it was however blunt, or harsh it may have seemed at the time. They were my inspiration, they still are my inspiration and for that I am eternally grateful. 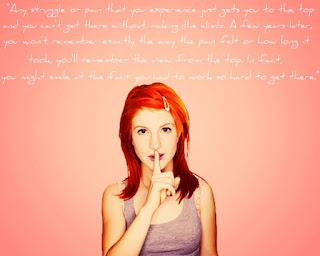 Email ThisBlogThis!Share to TwitterShare to FacebookShare to Pinterest
Labels: blogging for well-being, recovery 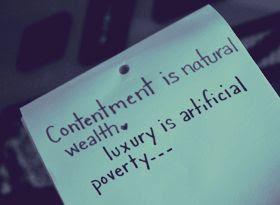 I have all I need.

My wealth is in my happiness,
The dawn of each new day,
The gift of life of which I'm blessed,
The friends who choose to stay.

I've wasted lots of money,
I've nearly lost my life,
Our time on earth is far too short,
To live close to the knife.

I look at those near to me,
And think of what I hold,
A family, friends, and I'm healthy,
I'm richer than those with gold.

Email ThisBlogThis!Share to TwitterShare to FacebookShare to Pinterest
Labels: blogging for well-being 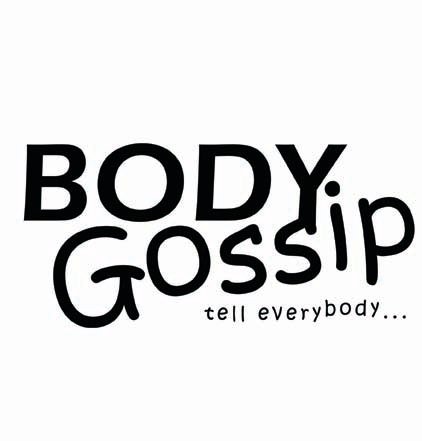 Within the course of your life there are many milestones, some you love to remember and others you would rather forget.  For most these include leaving home, starting university, your first job, buying a house, getting married, having a baby and your childs first day at school.  The list is endless.
Ok, I didn't get to University, in fact I scraped through college, but I have other more 'emotional' milestones to celebrate.
Amongst these are smashing my bathroom scales, shopping without calorie counting, forgiveness of others and moving on, being discharged from the eating disorders team and acceptance of myself flaws and all.
It was during my recovery that I stumbled across 'Body Gossip' on you tube.  The first video I watched 'This one is for you,' gave me hope and inspiration and to this day will still bring a lump to my throat and a tear to my eye when I watch it.
For those of you who have not heard of 'Body Gossip,' they are a charitable organisation that have been collecting real body stories from the general public and  and turning them into theatre shows, short online films presented by celebrities and now the 'Body Gossip' book.  Through these they strive to promote diversity and acceptance in the subject of body image.
It was after reading the Body Gossip web page and watching the videos I decided to send in some material which I had written at the beginning of my recovery.  The message received through their videos was so powerful, if I could be touched, inspired by someones words then maybe someone could be by mine.
I was amazed, elated, peeing my pants when I received an email to say that my story had been chosen to sit alongside 300 more from celebrities and the general public and be published in their new book!! 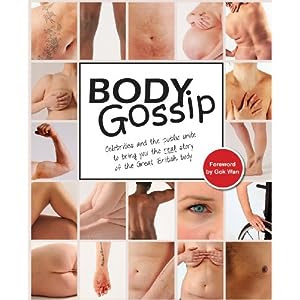 Fast forward to the day of the book launch.  It was friday September 7th and after an extremely stressful journey from Paddington to Upton park in London, I was settled into my Sisters ironing my dress ready to wear that evening.  Absolute horror, my brand new dress had a stain on it!!  As I had no back up outfit I had no choice but to wear it and cover it with my handbag....clever thinking.
I set off to Kings Cross ditching the idea of attempting to wear either of the two pairs of heels I had brought and opted for the safer flat option.  By the time I arrived at the venue my makeup had practically slid of my face in the heat, I was wishing I hadn't taken my jacket as holding said jacket and balancing a glass of champers whilst trying to hide stain on dress with handbag was a bad idea!!
The place was buzzing, the atmosphere was electric, and what did I do?  Stand there like a plum not quite knowing what to do.  I suppose it was one of those social situations where as you have nothing to compare it to, you just get a bit stuck! Apologies to Natasha Devon on meeting her saying, 'you must be Natasha,' and nothing else. I can be such a twit sometimes. A few glasses of wine later I forgot my nerves, met some wonderful, inspirational people and thoroughly enjoyed myself.  The preview of the new Body Gossip films were funny, tearjerking and a credit to all those involved. 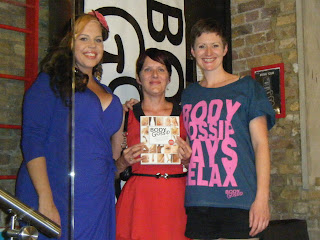 Me with the wonderful Natasha Devon and Ruth Rogers the organisers of body gossip.  Book is hiding the stain on my dress!!  I resisted the urge to say 'great tits,' only Gok himself could get away with that.

So thank you Body Gossip for allowing me to be part of your amazing project and an unforgettable evening. I have now added to my milestones.