Stretch Marks, Back Fat And All Things Body Gossip.

The past few weeks have been really hectic with training for a walking Marathon, the emotional turmoil of dealing with my Eldest Sisters diagnosis of Cancer and the weekend travelling to London to visit and offer support. In between all this I have been collecting spoken word interviews from a diverse group of people for the new Body Gossip show due to be scripted for the South Bank Centre in London in October.... and this is what I want to tell you about.
Body Gossip want to showcase our real body thoughts, how we feel about our bodies, what influences us, what we would change if we could, what we find attractive in a partner and a whole lot more.
So far I have spoken to a wide cross section of people. Both genders, a variety of ages, cultures, sizes and races. A lot of what people had to say I expected, but there was a lot which surprised me, saddened me and made me laugh. We spoke about boobs, bums, stretch marks, tattoos, scars, labia's, tummy's,belly buttons, willies, fat, the media and so much more.

So far I have interviewed a woman of 65 who is a naturist.
A Mother (47) with her Sister (30) and 2 children (23+26)
A married couple in their early 60's.
A Mother of 2 who is a pole fitness instructor.
A Man who has lost an incredible amount of weight using a commercial weight loss plan.
2 young men both aged 24.
A woman of 21.
4 women between the ages of 20-35 who are members of the W.I,
Each person had their own unique story to tell, whether it was focused on childbirth, weight loss or acceptance of how they look, each was as important as the other.

One of the people mentioned above was Mitch who lost over 11 stone. At first I had reservations over meeting him. I knew him locally as the front man in a few local bands, but I had my doubts as he was a consultant for a major weight loss company.
I met him in the consulting rooms at his 'wellbeing centre.'  Initially my first reaction to this room was negative. I was faced with a pair of weighing scales in the middle, floor to ceiling of weight loss products and artificial models of pounds of fat on a bookcase!! This was everything that I was not about.
I wanted to turn on my heels and run away but instead I sat my lycra clad bottom (in my running gear) on his leather sofa and sweated it out.
I can safely say I made the right choice. Mitch is an amazing man. He has totally turned his life around and made a lifestyle change for the better.
My regular readers know my opinions on massive diet corporations but I am pleased that Mitch has a balanced view. He recognises the connections between food, thinking and emotions, he doesn't promote a quick fix but takes a holistic approach.
He also has an amazing sense of humour and isn't afraid to talk about his Willie ;) Thanks Mitch xxx

The second group of people I want to tell you about are the Shoreditch Sisters who are a Women's Institute group in east London.
Now if you are like me, your experience of the W.I would be watching the film Calendar Girls or the TV programme, 'Jam & Jerusalem.' So imagine my surprise when I looked at their blog and found vulva patchwork quilts and chocolate clitoris cupcakes!!
Seriously though, these group of women are amazing. Sitting alongside the cycling, crocheting and tie-dyeing are the campaigns against violence towards women and  female genital mutilation.
I met Lauren, Jamila, Martha & Emily in a park in Shoreditch in East London. We found a quiet area and sat on a blanket chatting about parts of your body that generally don't come up in polite conversation. The interviews were entertaining, inspiring and so interesting it was a while before I noticed a man was lying next to us, covering his ears and wailing loudly each time Emily mentioned her boobs!!!
Our time went so quickly, and it was only when my recording device was losing battery I realised we had been there for nearly 4 hours!! Thank you to the Shoreditch Sisters for an informative and fun afternoon and to Jamila's lovely dog, you are forgiven for peeing on my suitcase :) 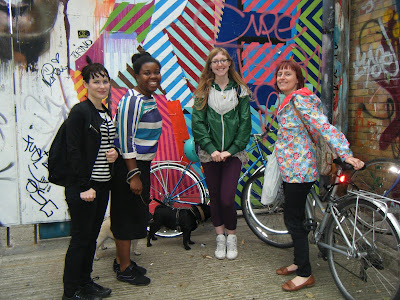 The deadline for submissions for The Body Gossip Play is the end of August. I have a few more interviews booked in, but if you fancy taking part, either drop me a line, or clink on the Body Gossip link.
at August 18, 2013 No comments: