Apologies for straying from my alphabet, time to crack on with the letter L.

Love....Noun: An intense feeling of deep affection.
I try not to use the word Love unless I actually mean it.  It is branded around indiscriminately which makes it pretty meaningless.  To love someone is to never imagine them not being in your life, to never have contact with them, to have a mutual respect, to hurt when they are hurting.  Now being in love is completely different!!  :)

Lillies...my favourite flowers, especially pink ones.  Yes I know they are traditionally funeral flowers but there is something special about lillies.  The petals feels like silk, the scent is amazing, the way they open from bud...love 'em.

Lonely....I have never been on my own..From the moment I left home I have either house shared or being in a relationship, so why sometimes do I feel lonely?  I have a great group of friends but I sometimes feel I don't fit in, I feel like the ugly one in the group of good looking people...the odd friend..I'm sure some of you reading can relate to this.

Lent...never given up anything and never intend to.

Little voice.....one of my favourite films. I can see myself in Jane Horrocks.  A timid, plain girl engrossed in a fantasy of her late fathers music with the most hypnotic and amazing voice.  (I wish!!)

Late...punctuality is not one of my attributes.  If you arrange a date with me I would suggest you tag an extra half an hour on to make sure |I arrive on time!!!!
at June 18, 2011 1 comment:

Email ThisBlogThis!Share to TwitterShare to FacebookShare to Pinterest
Labels: My A to Z

Have been looking back at my wish list which I posted in February, and how things have changed.
I am pleased to say that I am winning, if not passed the winning line and got a gold!
Food is no longer my enemy, it doesn't scare me or haunt my every waking moment.
I can shop without the stress and anxiety, I pick out food becausee I like it not because it is low fat or low calorie.
I recognise when I am hungry and know when to stop!
I cook for the family and eat the same meal...on the same size plate.
Eating out is not a chore but a joy.
I eat chocolate because I fancy it, the same goes for crisps, biscuits and nuts.
I feel good about myself, healthy, worthy, beautiful.
Don't be despondent, don't give up, fight for your life...you can do it and you are worth it. xx
at June 13, 2011 No comments:

Its been a while since my last post and things have been hectic but good.
I started my weeks leave from work with a camping trip on the Wye valley.  For those of you who are not familiar with this part of the country it is on the welsh border in the county of Powys or Herefordshire.
A group of nineteen of us stayed at the Hollybush campsite which is a very rustic campsite with a quaint pub and restaurant, it is on the banks of the river Wye and is popular with those wanting to canoe and kayak.
We had previous experience over a year ago when we camped in a very cold October......the site was cheap, and to be honest we got what we paid for!!! It is run by a lovely woman called Barbara, a bit of a barefooted, bra-less hippy from new Zealand.
She had her bedroom in the pub bar area and could be seen walking through the restaurant in her swimming costume as she was going for a shower!!
She is now a bit of a local TV celebrity as was recently on Channel 5's Hotel Inspector, I am pleased to say that after the show was aired her facilities are a little more usable whilst still keeping the quirky charm.
Background info done, back to the weekend.
We set camp on the Saturday after leaving home at the ungodly hour of 7am.  The site was very busy but we managed to find a spot in the tepee field, shaded by the trees.  Tents erected, kettles boiled, sandwiches made...the beginning of an adventure.
The first evening was pretty chilled, lots of humour, the cider was flowing and the compulsory game of fluffy bunny.  I cannot believe that Damien managed to fit 30 marshmallows into his mouth without chewing or being sick!!!
We all settled down for an early night ready for the next day of kayaking.....or so we thought!!!
I was one of the lucky ones, I will sleep through anything unlike my merry team of campers who were kept awake to the merry throngs of Kumbaya from the hooray Henry's in the tepees til the early hours.
The Saturday morning begun with a hearty breakfast cooked by Jen and Gly and after squeezing into my sexy wetsuit we set off for the river.
Now we had a few kayaking virgins with us, and they played safe by sticking to the almost unsinkable Canadian canoes.....note I said ALMOST unsinkable!!!!!
Some were 2 up and others 3, a few of us took to the one man kayaks and paddled upstream ready for the 13 mile trip which took us to the boat and anchor.  the river was at a good level, the rapids were gentle but had enough power to make you work a little over them.
What happened next I missed!!!   There was I, merrily paddling away, singing to myself along with my ipod and when I looked back there was no one....just me and the river.
I waited a while, then a little while longer before deciding to go back on myself to find the crew.
Well what happened was carnage.......they had been playing human dominoes on the weir!!!!  Not one, not two or three, but four of the almost unsinkable canoes had turned over.
Andrea was hanging off a tree, one was wearing a canoe as a hat and as for poor Jen,  she probably peed herself as no one would notice!!!  Thankfully they all survived to tell the tale and were very grateful for the campfire when they got back to camp later.
Did I fall in?  Thank goodness no, but I did have a few wobbly moments I was choose not to happen again.
All in all it was a good weekend, great company, good food and hilarious memories. 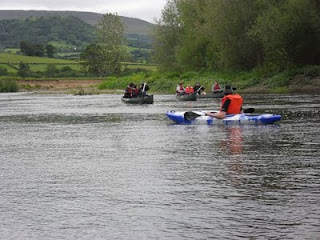