In Sickness And In Health. 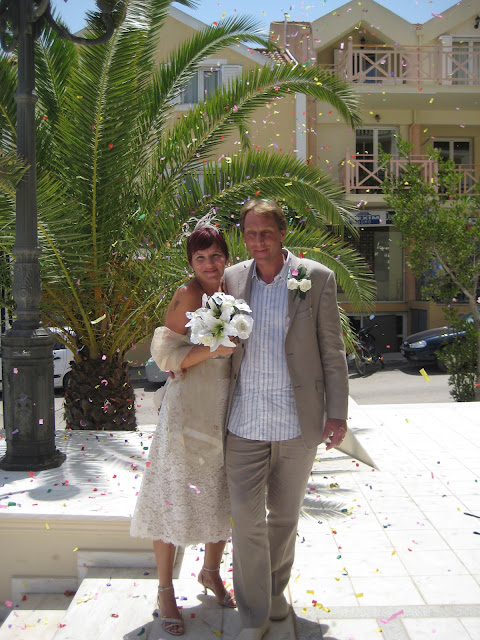 I can say without a doubt, this is one of the happiest days of my life.  Myself and Kev have been married for 4 years today, but have been together for 14.
When we met in 1998, I had recently separated and had a young child.  A mutual friend fixed us up on a blind date which ended up in an evening of backgammon (neither of us could remember the rules,), me playing George Michael Cd's (which Kev later admitted he hated) and us chatting until the early hours.
Kev knew I had a lot of baggage from early into the relationship. I was honest about my problems with an eating disorder, my failings in my previous marriage and the fact that I was far from solvent, but this didn't put him off.  The first few months was endless partying.  Kev had been made redundant so had most evenings and weekends free.  I was pretty new even at the age of 30 to house parties so lapped it all up.  I had died and gone to heaven.  A long haired, leather clad biker who told me wonderful stories about his adventures on the Greek Islands. Kev wasn't the settling down type. This was going to be fun!
Yes it was fun, but it was also a difficult few years.  Kev saw the first of my episodes with Anorexia, a messy divorce and a custody hearing.......and he still stuck around.
He had never had children, was not used to them but treated my Son as if he was his own.  I'm sure he has fond memories of taking Toby to football every Saturday morning with a hangover in the pouring rain!! Lets not forget the endless episodes of the Simpsons, WWF and taking him to wrestling matches!
Kevs love of bikes wasn't restricted to the garage.  I can remember cooking a meal before we moved in together, only to find bits of bike engine in the cupboards where there should have been pots and pans.  For years he tried to get me to agree to him keeping his Kawasaki in the kitchen!!  I don't think so.
Its very strange moving into someone elses house.  It was a while before I felt comfortable putting out my personal effects, but I few years later I had redecorated the bedroom, spare room, hallway, kitchen and lounge!!  When I say redecorate I actually mean choose the colour of the paint.
We had been together for 10 years before he proposed. Marriage was something he had never contemplated and didn't see a point in so it came as a surprise.
We agreed on the Greek Islands as Kev loved them so much, and we could almost guarantee good weather. We were pleasantly surprised when a small group of friends came with us to celebrate.  It truly was a wonderful 2 weeks.
As I'm writing this I'm thinking about how we all, and me included may grumble about our partners, what they have or have not done.  I think about all the things Kev has done over the years, not the hearts and flowers stuff but the real big things. Supporting me throughout illness, throughout bereavement, financial difficulties, emotional difficulties and think myself lucky that I have him.

For Kev x
Excuse the screachiness of my singing!!!