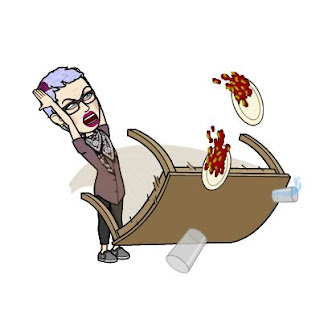 So after the diet coke fiasco I'm back on board.
Inpatient had rules, lots of rules.  Diet coke was not allowed. Neither were any fizzy drinks, sweeteners, skinny versions of hot chocolate, sweets, mints, I think you get the general idea now.
Other rules were classed as 'non-negotables.' No point entering into a discussion about them as you would not be onto a winner.

Dining Room Rules.
Everyone sits down to eat at the same time and have  an agreed start time when staff are seated.  This always didn't work out to plan.
One morning I overslept, was woken by a nurse and staggered to the dining room still with creases on my face.  Luckily I was allowed to eat in a quiet room with support so I didn't disturb others.
Often we were short of staff or they were supporting others who were trying to negotiate the non-negotables.  No point trying, you're not going to win.

We had 35 minutes in which to finish our meal or 20 minutes for snack.
No tissues or napkins were allowed at the table.  Meals had to be eaten with a knife and fork, no cutting food up into very small pieces and only 2 sachets of condiments allowed.
Teaspoons could be used if your pudding came in a pot, otherwise it was a tablespoon for cereal.
We were not allowed to leave the table until either the time was up or everyone had finished.  Very rarely did that happen.
The dining room itself was OK, although a little tight on space when everyone was trying to measure out milk and cereal. Yes, you heard that correctly.....cereal was weighed and milk was measured.
No risk of trying to bend the rules as staff had eyes like hawks, and why would we?  We were all there for the same reason.  To weight restore and get better.  Saying that, there were a few incidents of watered down milk and tampered with cereal!!
We had set places to sit which were changed every week.  Dependant on your support needs you would have a member of staff sat close by to help if you were in distress.  The peer support at mealtimes was amazing and often we supported each other when staff were busy or unaware. Unfortunately many of us kept our distress to ourselves and died slowly and quietly inside. 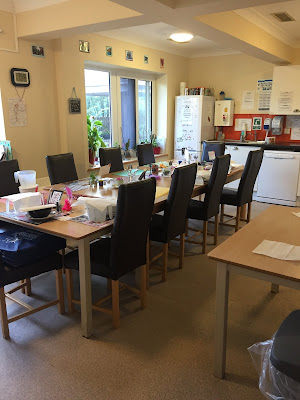 Mealtimes as you can imagine was a very anxious and distressing time for all of us.
Re feeding can bring up lots of emotions and for some triggering memories.  I had many of these in the dining room due to memories from certain foods, smells or music.  I dealt with this in not so positive ways so my hands had to be kept above the table whilst I squeezed the life out of a squidgy ball.
As much as I tried to burst the damn ball over a period of 2 months it didn't happen. I was well impressed when a patient told me after my discharge that he had eventually killed it. Good one Sam.
My place at the table had many things that reminded me of why I was there and why I needed to get better. My photo collection grew so large that I practically had built a wall around my placemat.
It looked a little childish but it gave me some focus other than what I was eating....distraction, distraction. 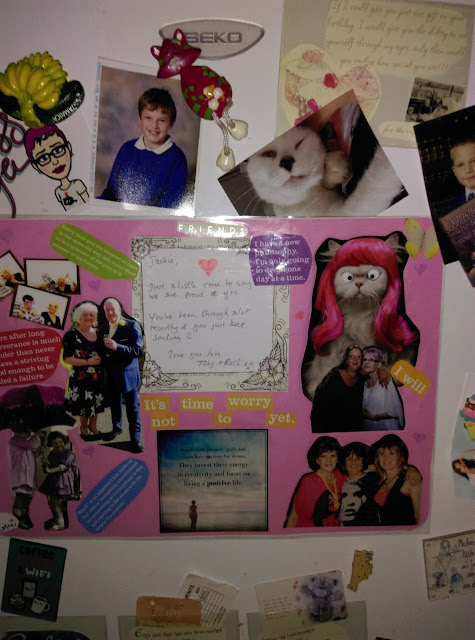 I'm happy to have my cereal teaspoon back, has to be the one with the rounded handle, and my white plate and bowl.  We were allowed to have our own mugs......This is mine. 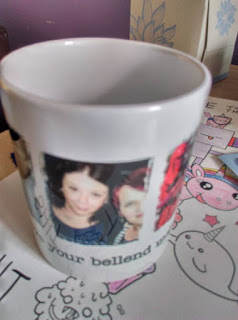 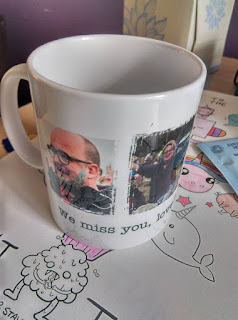 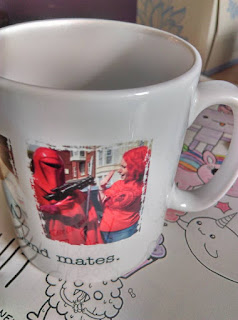 I mustn't forget the door!!  The dining room door slammed if you didn't close it gently. This as you can imagine be distressing especially if someone is in a constant state of hyper alertness.  The 'please close quietly..I slam' notice got bigger and bigger (courtesy of A) and was still ignored.  The words  'for fucks sake' or 'DOOR' were regularly heard.
I'm sure before I left they had got around to getting it fixed.  Anyone reading who can let me know, please do. :}