I can't believe Its been nearly 18 months since my last entry.  Apologies to my followers and hope there are still some readers out there.
My lack of posts is due to lots going on with my mental health (surprise surprise) and a liveware issue of foggy brain forgetting my log in details! I think today's porridge must have given my brain a well needed kick start.
So what's been going on?
2017 started with... actually I have no idea how it started.  I can only presume it was with a glass in my hand and the intention to change my life for the better.
I had been absent from work since the previous June and decided to drop down to a less stressful role.  This initially worked out well as was only a 5 minute walk to work and my phased return initially meant I could work around my meals and my numerous medical appointments.
For someone who does not do mornings well, it was bliss to roll out of bed and have work practically on my doorstep. Unfortunately things did not work out as planned but I shall come to that later.
March was my big 50th which I spent on a beach in the stunning Dominican Republic. Massive shout out to the Hubster and Deb and Glyn for arranging what was without a doubt the best holiday I have had and will never forget.  It was the most relaxed I had been in ages and I even managed a practically all-nighter at a very interesting club/cabaret called the Coco Bongo.
There's life in the old dog yet, although I wont go into detail about the podium dance. 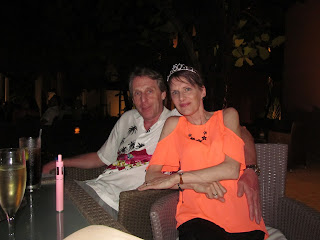 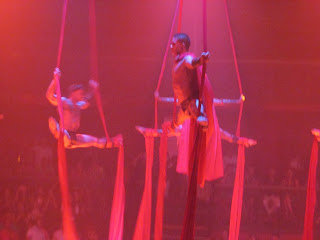 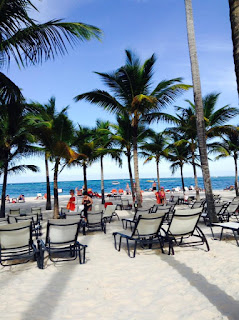 My birthday didn't stop there either. The day we flew back I was due to go out for a drink with friends. My Son texted to say he couldn't come over and other friends said they were busy.
I couldn't understand why Kev was pushing me to go out especially when we were both knackered and I would have settled for a coronation street omnibus, some haribo and the cat!
Little did I know what my friends had in store, but a suprise get together along with a very good friend who had made an amzing cake and driven from Evesham.
March was a good month, things were looking up......It didn't take long for the downwards spiral.