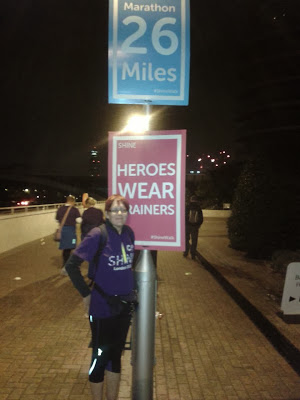 Well I actually did it. After several months of training I finished my first walking Marathon in 7.5 hours.
When I initially registered for the walk I did it for a personal challenge as well as sponsorship for Cancer research. 18 months on from having a major hip operation I was determined to push myself to do something I previously couldn't have contemplated.
The training schedule was not too bad but trying to fit in in with working full time and life in general was tough.......but not as tough as spending weeks or months having  treatment and suffering drug side effects.
When the day came I caught the coach to London, armed with a bum-bag full of plasters, glucose tablets, flapjacks and loo roll!!!  Victoria station was filling with people from all regions (and countries) wearing the recognisable purple Shine T-Shirts with optional coloured wigs, leg warmers, tutus and neon makeup; and that was just the men!!
A short train journey away and I was at Battersea power station, along with 16'000 other shiners and I was petrified.
The atmosphere was beginning to hot up, the stage was lit and we were entertained by belly dancers and the London Rock Choir. The electric atmosphere was inter mingled with moments of quiet, reflection and tears as the big screen showed us testimonials of cancer survivors. It was difficult not to be moved......... 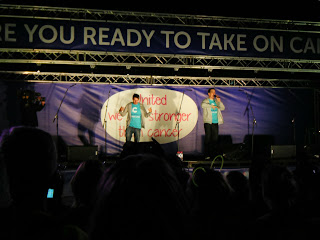 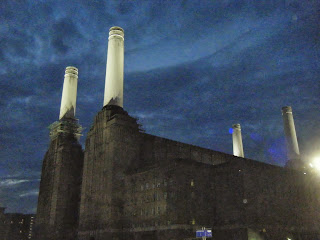 The Shiners started walking at around 8.15pm and as a 'strider' I started making my way towards the start around half an hour later. It was bottle neck for a while but after the initial stop start myself and several thousand others, were on our way around the 26 mile route, and London began to be lit up with a sea of glow sticks, fairy lights and flashing bunny ears. Me, I took the safe option and dressed for comfort.
At first the weather was kind to us but throughout the course of the evening it rained several times, and no sooner had we dried off it started again!!! Trust me, rain, dyed red hair and glasses is not a good combination.  The organisers had pit stops every 7 miles where we could grab a pee, water and snacks.
but after queueing at a portaloo for half an hour I decided that would be my last toilet visit' even though I was finding it difficult to keep my wind to myself!
As a 'lone' walker I was nervous, but plucked up the courage to chat to a fellow walker. She was called Lyndsey and had come over from Holland. This was her second walk and soon she was setting the pace and telling me about why the cause was so important to her and her family........this woman was my motivation throughout and I was so thankful for her support and spurring me on when I was tired. The Dutch sense of humour is rather funny and I admired her bluntness!
The route was amazing,passing many London landmarks some which were even more beautiful in the moonlight. 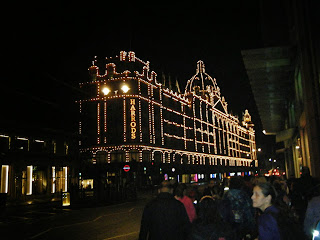 The atmosphere in the crowd and in the city was just something else. All of us were there for the same reason, it wasn't a race it was a group of people united in telling Cancer where to get off.  Revellers coming from pubs and clubs were cheering us on and clapping. The Marshall's who I swear must have sore hands from all the high fives were giving us that boost we needed at each corner and junction.
Despite all my training this challenge was tougher than I expected. The first 10 miles were a breeze, but after that the tiredness kicked in. After 15 my thoughts were turning to bed whilst my legs were turning to lead. My regular check ins on facebook came back with messages of luck and they added a bit my fuel to my furnace. The worst was around the 20 mile mark. 20 miles was something I had managed at home, but after a good nights sleep and in day light!! trust me night walking is a different ball game. The final miles seemed to take forever, which each step getting heavier and heavier. Lyndsey told me a story of her walk last year, where her brother was in front with a photo of their Mum on his back....this was all the motivation she needed.
I thought of my Sister, I thought of the Lady on the start line who was walking on crutches, the lady being supported by her Husband who was using a stick, the elderly couple who were walking at a snails pace...and I kept going. As Lyndsey said, the pain and discomfort we were going through at that time was nothing compared to the pain a cancer sufferer is going through, and she was right.
Stepping over that finishing line was a wonderful feeling, and a massive personal achievement, and I've never been so grateful to take my trainers off and have a hot cup of coffee.
To all those who supported me a huge thank you.
And those who thought walking a Marathon was no big deal......put your money where your mouth is and you do it next year :) 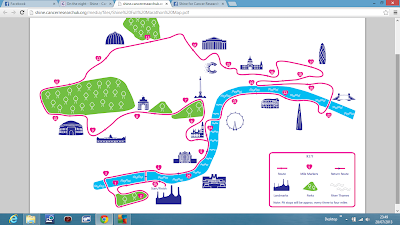