Word Of The day. Day 4 Crazy 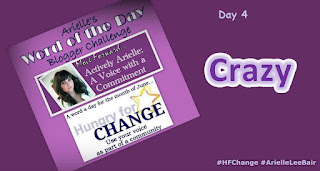 When I was a child there was a local Psychiatric hospital called St Lukes nearby, which was often referred to as the 'Looney Bin.' My parents would often comment if I was 'misbehaving,' you will drive us to St Lukes! That never happened, instead I developed an Eating Disorder and became an inpatient in a different 'looney bin,' many years later, for 'crazy' people.  I met a lot of 'crazy' people in my short time there. Elderly patients with dementia, young mothers with post natal depression, teenagers with bi-polar.  These weren't 'crazy' people they were people like me with an illness, people who needed support not to be judged or labelled.
For me now. I see crazy as a good word, the same as I see bonkers or mad. I used to dye my hair pink and red using crazy colours.  I can often wear crazy outfits.  I can be impulsive and do crazy things. I have crazy friends. I love crazy. 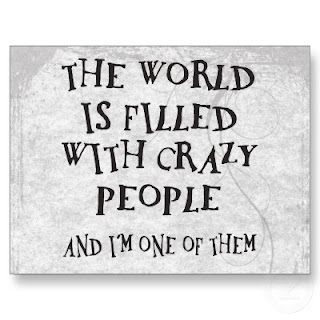 If your driven crazy don't let anything get under your skin.
And if your crazy driven. It's your time to sin...
Shauntae Taylor