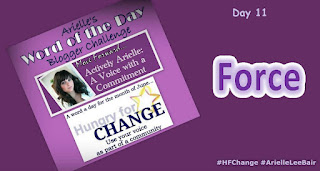 My initial reaction to the word 'Force,' was the links to aggression, violence and rape. Nurses in hospital almost forcing food down you, being watched over whilst you forced the ensure down your throat!! Then I thought of Star Wars I did....may the force be with you.
Darth Vader: He is here.
Governor Tarkin: Obi-Wan Kenobi? What makes you think so?
Darth Vader: A tremor in the Force. The last time I felt it was in the presence of my old master.
Governor Tarkin: Surely he must be dead by now.
Darth Vader: Don't underestimate the Force.
Governor Tarkin: The Jedi are extinct, their fire has gone out of the universe. You, my friend, are all that's left of their religion.
[answering a comm signal]
Governor Tarkin: Yes?
Voice over comm: We have an emergency alert in detention block AA-23.
Governor Tarkin: The Princess? Put all sections on alert.
Darth Vader: Obi-wan *is* here. The Force is with him.
Governor Tarkin: If you're right, he must not be allowed to escape.
Darth Vader: Escape is not his plan. I must face him, alone.

The force to fight back, the force to take back the control from something that has damaged you and battered you for what seems like an eternity. Then to create a force field of support network around you.

Love is the only force capable of transforming an enemy into friend.
Martin Luther King, Jr.

Non-violence is the greatest force at the disposal of mankind. It is mightier than the mightiest weapon of destruction devised by the ingenuity of man.
Mahatma Gandhi Email ThisBlogThis!Share to TwitterShare to FacebookShare to Pinterest
Labels: hungry for change