January 2nd. How Do You Eat Yours? 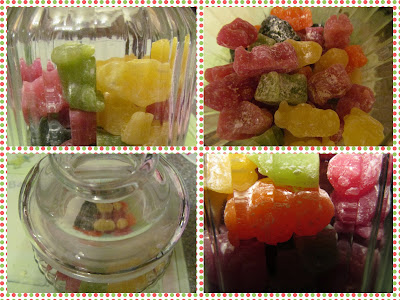 Jelly babies :)   I love them. When I was a little girl they were so much bigger, but like all the sweets of yesteryear they have decreased in size and increased in price!! My only criticism has to be that they are very difficult to stop eating and depending on the brand, can have too much icing sugar on them.
I have to admit, even though my eating disorder is under control I do have to put the jar in cupboard. Out of sight-out of mind is definitely true with these little blighters.
Originally known as Peace Babies, Jelly Babies were launched 75 Years ago by Bassett's - one of Britain's oldest sweets manufacturers - to celebrate the end of the first world war
Peace Babies were popular between the wars, but due to a shortage of raw materials, Bassetts stopped producing them during the Second World War. They were reborn in 1953, and renamed The Jelly Babies.


Why Did The Jelly baby Go To School?
Because He Wanted To Be A Smartie :)

Apparently you can tell a lot about a person by how you eat them!!

A little thought to be going on with. We are all bit like sweets. Sometimes sweet, sometimes sickly,sometimes bitter, often nutty, can take a long time to get to the best bit, what you see on the outside is not always what you find in the inside.