Everyone has a secret pleasure. One of those things that you hate to admit you love, people cringe when you mention it, but secretly they like it too!!  Mine just happens to be Karaoke.

I discovered my love of karaoke one Christmas at Butlins whilst I was supporting Adults with Autism on a weekend break.  Imagine the scene, twinkling fairy lights in the huge ballroom, Larry the lion sweating his bollocks off in his furry suit, revellers getting pissed on 3 for 2 drinks offers  and there was little old me, on the stage, belting out the Brenda Lee classic whilst rocking around the tackily dressed Christmas tree.
It went downhill from there.  I became obsessed with the talent(less) show, 'Stars in Your Eyes,' even booking the evening off work for every final so I could watch it uninterrupted.
Now I will admit to being a bit off a show off at times and have always wanted to have my 3 minutes of fame on TV, this seemed like the ideal opportunity.  The challenge was set, and I spent the next couple of years practising to sound like Suzanne Vega, Karen carpenter, The Cranberries and sending tapes of to 'Stars In Your Eyes.' Unfortunately I was never chosen for an audition so I decided to stick to being myself.
I did eventually get my 3 minutes of TV fame in 1995.  Well actually it was about 45 minutes, and that's a totally different story which I will save for another day.
I started to take myself a little more seriously and began voice coaching, if anything to sort out my breathing and give myself a little more confidence. My singing at this point was still isolated to Friday nights at a local pub, belting out tunes over a dodgy (and 20 years on, still dodgy) sound system.
When I started going out with Kev my circle of friends changed dramatically.  Where I live has quite an active live music scene and a lot of people Kev knew were involved in this.  We spent many good nights sat round friends houses, drinking and singing along to acoustic guitar.  The first time I sang publicly and properly was with a local brilliant musician and songwriter at what was the first of many Folk/acoustic nights in Burnham.
Unfortunately the same person who set me up also brought me down on one drunken evening by telling me I couldn't sing.  This cut deeply, and I believed him.....  I didn't sing for a long time after.
I did regain the confidence to get back up again and went back to the same club and sang a Sinead O, Connor song acapella, whilst in my head sticking two fingers up to him who said I couldn't.
Over the next few years I dabbled with a few friends, again singing at the local acoustic club, I haven't done that for over ten years and would love to again.  I seriously need to learn to play my guitar!!
Now I resort to karaoke, at home, at the local pubs and at friends houses.   Either that or I wait until the 'Ginger Hitlas,' are playing and I jump on the stage and join in. 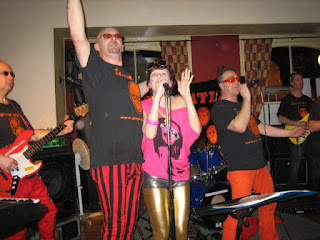 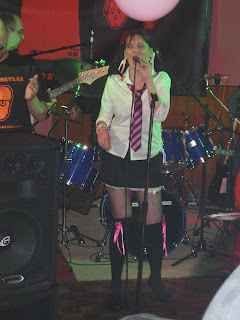 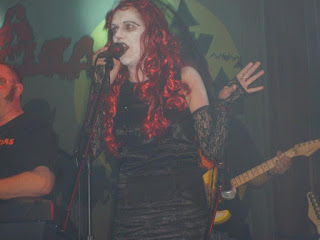 Lenny the dog howling whilst I sing Wuthering Heights.
Singing Dominic the Italian Donkey at Christmas.
Singing 'Pack up,' after someone pissed me off.
Going to a karaoke competition at a local bar every weds for a month and winning cash every time.
Trying to do the Kate Bush hand movements whilst singing Wuthering heights.
Really bad singers, I love people who don't take themselves too seriously.

What NOT to say to me whilst I'm hosting the pub karaoke.
'I'm going in a minute can you push me up the queue.'
'Turn me up'.....without a please.
'Its the wrong version.'  NO, its the only version.
'Its too slow,' No its not, your out off time.
'Why do you make the welsh sound bad and the English good?'
'Whats that song called? You know, the one that goes, la la la,'
'Is it on?' generally said whilst shouting down the mic at the same time as hitting it!! 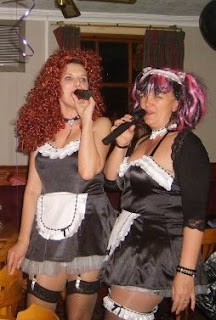 So that is my secret pleasure.  Just a little point to think about on the 'Stars In Your Eyes,' show.  Don't try to be someone else, you are good enough as you are. Be yourself. Love the skin you're in.