Its that time of year where if there's a bug to catch, chances are I will get it!!  Today I feel like poop. Hot and cold, sore throat,headache, chesty cough and a course of antibiotics. What started as a cold last week has developed into a full blown chest infection. Typical!! Just when I had plans for the weekend too.
So what can I do to help myself, a little bit of self care?  Keep warm, drink plenty of fluids, regular paracetamol and STOP smoking.
Yesterday was the start of Stoptober, a new campaign from NHS Smokefree which will encourage smokers from across the UK to stop smoking for 28 days. If smokers can stay smokefree for this time, they are five times more likely to stop for good.  Now I have been a serial stopper for many years, with and without the use of patches/gum etc so what is so different about this time?  Probably nothing, but it certainly wont hurt to try.
I was never one of those children who pinched a crafty fag from their parents. I hated smoking.  Most of my immediate family smoked, and regardless at home or at Grandparents houses there was always a fog of cigarette smoke.  In the North East it went hand in hand with  chips cooked in beef dripping and Sunday afternoons in the local pub. Mum smoked superkings and I can remember her moving onto a rather posh brand at one point which made it almost acceptable.  Dad was very much a roll your own man, we were often sent to the local newsagents for his half an ounce of baccy and rolling papers. That was of course back in the day when you could buy cigarettes as a child.  Thank goodness some things have changed for the better!!
I started smoking around the age of 19.  I can remember my first cigarette vividly.  It was a Marlboro red, one of the strongest you could get and I nearly choked as I inhaled the potent smoke.  They were left at work by a colleague and I thought they were the answer to my stress, anxieties and depression at that time.  This would be one of many 'short term fixes' I would choose in my life.
Its very surprising how little time it takes for the nicotine addiction to kick in. Before long I was like every other 'addict,' looking under sofa cushions for change for a pack of 10 before payday, having that first fix not long after getting out of bed, pretending to pack in and lying to yourself as well as others....until I became pregnant.
This was the time when I stopped completely and remained smoke free for many years after.  I cannot remember how many times I started and stopped after that. Too many to mention I should think.
When my Father became seriously ill this was when I decided my life needed to change.  Dad had suffered from cardio vascular problems since the age of 45 (my age now) Had heart attacks, angina and had numerous strokes before his death at the age of 66. I have no doubt that his illnesses were smoking related, they certainly could not have helped.  I had seen a  family lose their Father and a Wife almost start the grieving process before he died.  I was not going to go the same way.
I gave up the Cigarettes for 6 years and stupidly started again thinking I could just have one, then another, then another.
Before my operation in March this year I again gave up.  This again was triggered by my ill health and chest infections/Pleurisy.
So 7 months on here we are again. I managed fag free for 5 months, this time it needs to be forever.

Reasons For Stopping.
To be healthier.
Reduce my risk of stroke/heart disease.
To enjoy life with my family.
Increase my lung capacity and sing better :)
Not to be a slave to the fags.
No more standing in the rain smoking.

I was thinking around distraction techniques, changes of routine and identifying triggers.  It is similar to how I coped with stages of ed recovery.  If I can achieve that then I should be able to achieve this.
Keep you posted. 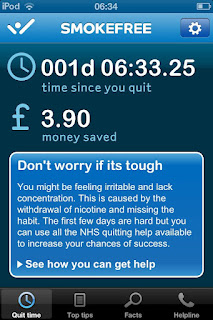 Email ThisBlogThis!Share to TwitterShare to FacebookShare to Pinterest
Labels: life, self care