So here I am nearly 5 weeks post op on the verge of cabin fever thinking, is this really worth it, will it make a difference? Let's go back to beginning and see.....
I can't remember exactly when I began to have problems with my hip, it crept up on me gradually before wham bang! there it is, a pain in the rear side.
It was probably around 5 years ago when I realised I had a problem. I had started a self defence class run by a colleague then progressed onto Ju Jitsu. Although I was never interested in being graded or maybe wasn't good enough I enjoyed the exercise, the physical activity and the getting rough with the lads! :) I particularly enjoyed the ground fighting and had a great ability to get myself out of tight situations and very small arm holes, but the one thing I struggled with we're the kicks. I just could not lift my right leg up without a considerable amount of pain. I persevered and decided to just use the left instead, and it seemed to work ok.
Moving on 12 months and I had changed work place. I was still with the same employer but our building had been sold and we were 'rehoused' so to speak a few miles up the road. No big deal, although I didn't drive there was shared transport, public transport and when the weather was fine my old trusted push bike. I went every where on my bike cycling furiously never being able to get into the right gear! Some people who I became friends with a few years later used to comment on, 'the mad looking woman'who cycled past their house every day. Not quite sure where the mad came into it!
By this time I had knocked the martial arts on the head, or should I say it knocked me on the head after an awkward fall but I was still having problems with my hip.
At that point I couldn't work out where the pain was coming from. It started in my groin, radiated down to my knee,was ok when I was laid down but painful when I was seated. My hip would often lock and when cycling I would have to stretch my leg out in order to release what was catching. Eventually I had to put the bike to rest as even getting my leg over posed a problem :)At this point I chose to ignore it, putting it down to just 'one of those things,'but the pain got worse.
Around 3 years ago I decided to ask the advise of my GP. Was this something that was happening with age, although at the time I was only 42 so not exactly over the hill, or could there be something done about it. After a physical exam and still an uncertainty where the pain was generating from I was referred to the physio dept. at my local hospital and was quite surprised at the result.
I had a full physical exam, discussed posture, how I used to sit on the floor with my legs right out at the side of me as a child (my party piece)and then sent me off for an X-ray. I was rather surprised with the results. I appeared to have a condition called 'hip impingement,' or otherwise known as femoroacetabular Impingement. (aka: Femoral Acetabular Impingement)

Femoroacetabular impingement or FAI is a condition where the bones of your hip joint come too close and pinch tissue or cause too much friction. Usually, the ball of the hip joint (femoral head) sits on the femoral neck similar to an ice cream sitting on a cone. The pinching and friction occurs when the femoral head and neck contact the socket (acetabulum), creating damage to the hip joint. The pinching or friction may cause damage to the labrum (a fibrous cartilage that lines the outer edge of the socket) and/or the articular cartilage (the white covering over the bony surfaces that results in the very smooth surface gliding of the joint).
In summary, one massive ouch!!
From there I was referred back to my local physio team and was given a programme of muscle strengthening exercises, a GP referral to the gym and several months of weight bearing exercises along with regular painkillers none of which helped.
The next step was an MRI scan which I had never had before and was an experience in itself.
The objective was to look closely at the hip cartilage and to see what damage if any had been caused by the friction from the hip joint.
The process took place under theatre conditions and involved firstly a local anaesthetic injected into the hip joint followed by a dye. I will point out that all of this I could see on a screen above me and was quite freaked out until I was told, that was not the actual size of the needle!!!! It was a very painful experience which to add insult to injury whilst putting the needle into the second hip the damn monitor broke down! After what seemed like an eternity, the man with the monitor knowledge had appeared and we were back on schedule with a very large prick. With both hips now totally numb and filled with some probably highly toxic substance I was escorted to he waiting area for my MRI scan. Now you would think that having slight mobility problems induced by local anaesthetic, the trip down a very long corridor and through 2 hospital departments would involve a wheelchair! Well you would be wrong. I was led to the waiting area, wearing my arse revealing hospital gown, no bra and exposing rather unshaven legs, to make matters worse the nurse had not taken me to the MRI scan waiting room but the public X-ray waiting area where I sat for an unmentionable length of time, wanting the floor to open and just eat me up. I remember feeling very exposed, vulnerable and humiliated whilst trying to avoid eye contact with the hobbling sling wearing patients.Eventually I was taken to the correct waiting area, changed into a sexy blue trouser suit ensemble and chose my cd of 80's classics to listen to whilst in the 'tube.'
This was my first experience of a MRI scanner and I would think its the closest to feeling like a sardine or the inside of a sausage roll I would ever get!! Im not sure how long I was enclosed for but despite the rattling noise and the bumps I still managed to fall asleep throughout the process.
The result of the scan showed that I had labral tears on both sides, the left being the worst. The first course of treatment for this would be local anaesthetic and steroid injections in both hips following a similar procedure to what I had just encountered.
I had these on two occasions, first without any sedation and the second time under a light anaesthetic. I remember waking up in recovery asking all the nurses if we have got off the bus yet!!!
After both sets of injections I did get relief from the pain from a short period
of time but ultimately they did not work long term.
For anyone who knew me and even those who knew me well it was easy to dismiss the pain I was encountering as it was not visible and I carried on with my normal every day life. I did things I shouldn't , but mostly that was down to my eating disorder and the desire to burn of excess calories came before any pain threshold!!! How stupid was I.
I had 2 consultant appointments in the 12 months before my op. The first last summer the consultant was willing to have me on the waiting list straight away but I refused. I pleaded to try the injections just one more time, but no that was not an option. I went away disheartened with a follow up in January 2012 to see how things were going. I soon brought this appointment forward and in October 2011 went on the waiting list for surgery with my prep assessment the following month. 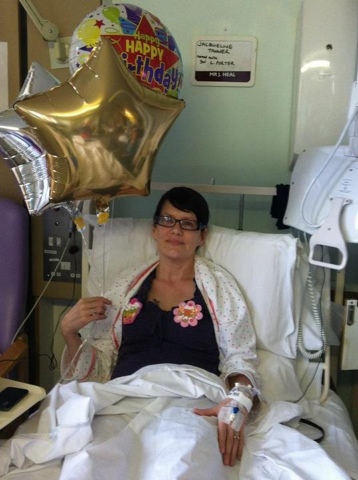 Email ThisBlogThis!Share to TwitterShare to FacebookShare to Pinterest
Labels: Me and my hip