On Saturday January 7th, myself and Deb set off to Bristol for her surprise.  Now Deb was no easy lady to buy for!!  I'm not saying shes high maintenance (although Hubby may disagree with me on that one ) but Deb is a little like me, if she wants something she will buy it, and why not?
So July last year I wracked my brains trying to think of something she would like.  Now she didn't do heights so the usual 'experience days,' were out off the question, we had already been to a spa  a few years previous and the last time we went to the theatre I got drunk and fell asleep!!!
It eventually came to me, spooks!!!  Deb had an interest in the supernatural and all things ghostly and eerie.
My challenge then began with hours trawling the Internet looking for clairvoyants, psychics, anyone half decent within a decent area for driving or public transport.  I eventually came upon a psychic medium called Bernie Scott who lived just outside Bristol, the only problem was she had no free weekend appointments until January!!  Thinking this means she may actually be good I went ahead and booked appointments for both of us giving only my first name.
Fast forward to January, a few days of a nervous Deb beforehand and what ended up as a brilliant day out in Bristol.
Now I have seen a few clairvoyants in my time and always approached the subject with a bit of scepticism and thought of it as a bit of a laugh.  The last one I had a reading with shook his head whilst chanting to get rid of previous spirits then told me I would be having another baby despite a full hysterctomy several years previous.  His reply to that was, 'well it is reversible isn't it?'  Since my Father  died in 2005 I have always hoped there was something out there, some comfort I could hold onto and felt this even more since my Mothers passing in March 2011. Up until now I had received no real 'message', to make me believe.
Deb had also had previous experiences so this could be interesting.  I didn't tell her until we were nearly at the door but she hadn't been put off despite my earlier hints at colonic irrigation and her guess of a circus skills workshop!!
We were pleasantly surprised. Bernie was an extremely warm and welcoming person who put us both at ease as soon as we arrived.  Deb agreed to go first with the agreement that she wouldn't give her opinion until after I had my reading.
It is difficult to write about Debs reading as It is difficult to interpret from a tape and it was also personal to her.  What I can say is that things were said which yes could be guessed and could be read into, but there were also things which could only have been know to those close to her family, those that had known the family for years, their children, relatives and places they had lived.  The reaction from Debs Husband also confirmed that hopefully it wasn't a wasted journey.
My reading was a little clearer, possibly as I have had many close relatives die, most which I still remembered and had memories off.  The session started with Bernie explaining that she was not a fortune teller but connected with the spirit world. It was difficult at first to understand or get a connection as the hope is always there, the wanting to believe that someone may be looking out for you after all.  I was not disappointed.
There were too many coincidences, too many things that surely she would not be able to guess.
On several occasions I had tears down my face, the mention of the book my Mum left which we found after she died, the words which she had written about me repeated by Bernie practically word for word.  How could she have known about the writing that I do, both in my personal life and at work? My involvement in charity work, the pain in my hips, the sweet peas in Dads garden, Mum telling me not to skip breakfast, a legal case I was involved in and far too much of other stuff to mention!
I do believe there is something after we die and for the moment I take comfort in Bernie's words.
Anyway, back to the day!!!
After a morning of emotion and searching for souls we set off for Bristol Centre and afternoon tea at the Royal Marriott Hotel, where the only spirits would be alcoholic champagne.
We were led to the very decadent drawing room with beautifully draped windows, opulent decor and an atmosphere of....posh.
The tea was wonderful.  A three tiered cake stand with a selection of scones, cream pastries and  various finger sandwiches.  Made a change from a couple of pints of cider and a kebab on the way home. 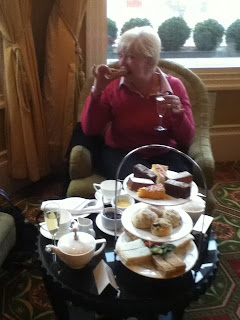 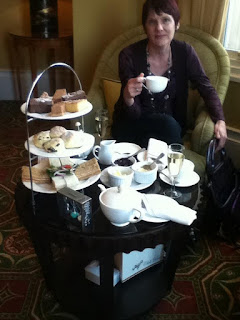 We finished the day with a very reserved window shopping trip consisting of us looking at loads of shoes whilst making various 'ooh' and 'aah' noises.  Can you believe we didn't buy any??
Well Deb, I hope you enjoyed your day out, just a small way of showing my appreciation for you sticking by me. Love you. xx
at January 19, 2012